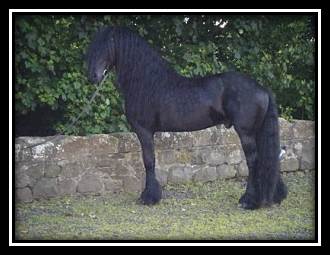 The Friesian Horse is an ancient horse breed originating from Friesland, in the Netherlands. Friesians are graceful and nimble for their size, and it is believed that their ancestors were in great demand as war horses during the Middle Ages (as far back as 150 AD) throughout continental Europe. The Friesian’s size enabled them to carry a knight in armor.

In rural Friesland, at the end of the 19th Century, the Friesian had become the horse for the wealthier, landowning farmers who, as an expression and confirmation of their prosperity, used a pair of Friesians to pull their gigs to church on Sundays. The horse was also used for pleasure, in the form of short-distance trotting races, in which they were ridden with a small orange blanket on their backs instead of a saddle. It was during this time that the Friesian breed was used to produce some renowned trotters, such as the Russian Orlov Trotter and American Trotter. 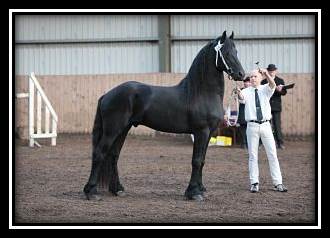 At the turn of the 20th Century, the Friesian experienced a very difficult period competing with heavier breeds such as the Gronings-Oldenburger type known as Bovenlanders. A greater deal of heavy farm-work had to be done and Friesians were considered to be a breed with “the blood of a noble gentleman and a talent for dancing” due to their majestic movement. The result was that many farmers switched from Friesians to Bovenlanders for heavy farm-work. This competition almost proved to be extinct to the Friesian horse breed.

On May 1st 1879, a group of people who were growing concerned about the future of the ancient breed met at De Drie Romers – a tavern in the Friesian town of Roordahuizum – and founded the Friesch Paarden-Stamboek (FPS), which was the founding of the first Studbook in the Netherlands. It soon became evident that the registration of the remaining Friesian horses in genealogical registers was having a stimulating effect on the breeding of the Friesian horse, but even so, the increasing popularity of the Bovenlanders had resulted in a sharp decline in Friesian numbers during the early years of the 20th Century. By 1913, there were only 3 older Studbook Stallions available for breeding, with no prospects for adding young Stallions to their numbers. It looked as if the breed was doomed to extinction.

It was at this time that around 100 individuals grouped in the Oranje Hotel in Leeuwarden and founded an association for the Friesian horse in addition to the Studbook in order to stave off what looked to be the breed’s seemingly unavoidable demise. Their objective – to apply a well-considered and expert Acquisition and Rearing Policy for the remaining full-blooded Colts that displayed sufficient quality. This breathed new life into the breeding efforts, and so the Friesian horse was spared what looked like certain doom. 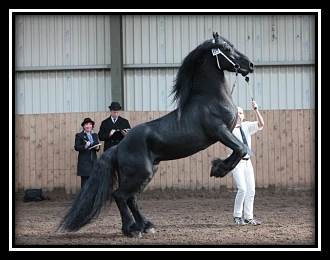 The 1960s was an era of crisis in the breeding of horses. However, this time the reasons were much more irreversible and inescapable than those that caused the crisis of 1913. During the 20th Century, the problem had centred around a competition between breeds at a regional level, but during the 60s the problem was the worldwide phenomenon of discontinuing the use of horses as a source of power in agriculture. Farms became mechanised at an unexpected and rapid pace, with all horses kept becoming redundant. Most farmers lacked the time and finance to keep horses purely for pleasure, and once again the ancient breed was threatened with downfall. In 1965, the Studbook contained only around 500 registered Mares.

Once again, the alarm was sounded in defence of a horse facing extinction. With might and man, attempts were made to turn the approaching tide. It’s quite possible that all of these efforts, as heart-warming as they are, would have come to nothing had it not been for a powerful factor that came to the rescue of the Friesian horse at the very last minute: the economy had taken a turn for the better after World War II, and the increased opportunities made it possible for people to devote time and money in hobbies and methods of relaxation, meaning the horse could be enjoyed simply for the pleasure it could give.

In just two decades, the Friesian horse took a spectacular lead over many other breeds; its exceptionally friendly disposition, intelligence and honest character were factors in its successful comeback. In just a short space of time, the potential of the Friesian horse for pleasure-riding, driving and equine competition was rediscovered, along with its potential for dressage. Perhaps even more importantly, the Friesian’s potential as a show horse was discovered anew. Though the breed faced extinction twice, the modern-day Friesian is growing in number and popularity, and has a shining future ahead of it.

The Friesian breed is renowned for its luscious and luxurious mane and tail, feathered locks and shiny black coat. In addition to the Friesian horse’s fantastic conformation, it also has a wonderful character evident in its friendliness, intelligence, adaptability, and its enormous willingness to work. It’s this character, in particular, that has contributed to the fact that through the centuries there have always been people willing to do anything to preserve the breed.

Friesians in the Movies

With its shiny black coat, long flowing mane and tail, and its feathered locks, there is no question that the Friesian horse is absolutely stunning to look at. This breed is as beautiful standing still as it is when moving, when its aristocratic carriage is shown off as well as its powerful gait. It should come as no surprise that the Friesian has been appearing in movies for at least 30 years, which has certainly contributed to the popularity of the breed.

Find what you’re looking for: